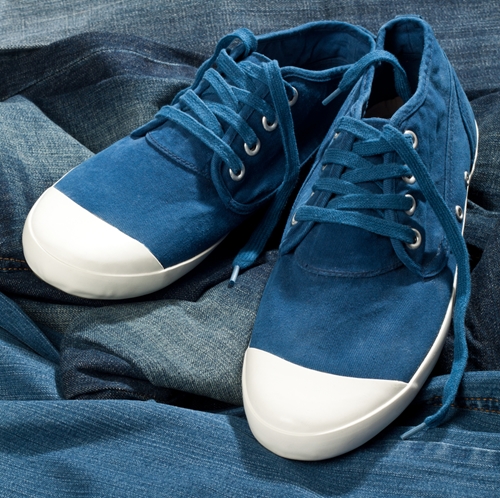 It’s 2015, and aside from the briefest glimmers of hope, the world is still without self-tying shoes featured in “Back to the Future Part II”. And don’t even get me started on commercially available hoverboards. Yet, as Tech Times has reported, one U.K. company is offering the next best thing with shoes that can change color on demand.

A product of +rehabstudio, the aptly titled Shift Sneaker involves a series of threads, fibers and textiles that all simulate normal LED lights, which allow for new colors and patterns to be displayed simply by changing the components’ shape. For now, the shoe itself is still in the design phase, but one day the studio hopes to have a dedicated app to allow for total customization of the shoe. The “Pack Store”, as Complex Magazine has noted, will even contain a few pre-set templates. The “Running Pack” can change sneaker color based on athletic performance, while the “Connect Pack” allows for matching with another user.

Designers are also toying around with a touch option, meaning one could click their heels (a la Dorothy from “The Wizard of Oz”) and turn on a pair of bright red kicks. Once launched, the shoe might push even more technological boundaries, Gizmodo reported. Potential fibers include one with “shape memory,” which could allow for specific shapes based on physical needs, and metamaterials, which can not only adapt to variables like weather and mud content but can also bend light. So, to whom do I give my credit card info when invisible shoes are available?

What other cool, customized products are there to look forward to right now?
Even in the developmental stage, the shoe is light-years away from other shoe customization options. For now, shoe-heads everywhere rely on NikeID, which allows them to design shoes online, have them manufactured in an actual Nike warehouse and then shipped directly to a residence. But with a six-week waiting period, folks are having to plan next month’s outfit instead of tomorrow’s. Still, as TechRepublic explained, other retailers are experimenting with the customization option. Google and Levi recently launched Project Jacquard, clothing featuring Google fiber that allows for direct interaction with smartphones, like silencing calls or sending text messages by swiping.

The end goal for Rehabstudios is to eventually be the sole (get it?) provider for sneaker devotees everywhere.

“When you buy a single pair of sneakers, you will actually be buying 1 million pairs,” the company said in a statement.

Makes loads of fiscal sense to get into the shoe game: According to a report from Forbes, sneaker sales in the U.S. in 2013 equaled a record-breaking $22 billion.