All About Google’s New Buy Button 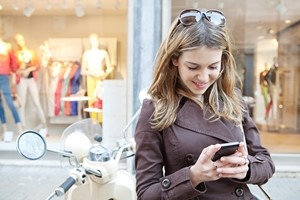 Google is introducing a new buy button in hopes of improving how consumers purchase on their phones.

Google is hitting the e-commerce business with its newly released buy button. This button will now appear on search pages on smartphones, aiming to streamline the online shopping process.

Simplicity is key
The new feature debuted on July 15, and companies including Staples and Under Armour have embraced the initial rollout. Google plans to make it accessible to merchants later this year or in early 2016. The goal is simple: Google wants to make it easier to purchase products. So now when you search for something on your phone, the purchase button and product listing ads will take you straight to ordering. Rather than having to navigate around seller websites, Google will let you compete a transaction directly.

Technology trends
One of the main reasons Google has installed this feature is because the number of people who perform searches on their phones rather​ than desktops is growing. However, studies show that most people aren’t actually purchasing. In fact, “purchasing through that phone probably wouldn’t even make the top 10 list of engagement activities that they do,” said Jason Allen, GameStop’s vice president of multichannel.

GameStop​’s experience reflects a trend: Although there has been a surge in traffic in retailers’ websites from phones, sales remain relatively small. People spend a lot of their time browsing, but still aren’t willing to commit to making purchases. Figures from last holiday season appear to back up this reluctance to complete a purchase. According to IBM, last November and December, smartphones drove 31.2 percent of total traffic to e-commerce sites, but accounted only for 9.1 percent of online sales. These numbers have driven retailers to change up their technology game.

Some stores, like Kohl’s, are looking to revamp their app to better engage customers. They were working to accommodate in-store shoppers who are more frequently searching for product reviews, watching video content about merchandise and sharing their finds on social media. Company officials have said that customers spend more time on the app than when they’re not in the store. Because of that, Kohl’s has developed a new “in store mode” for their app where upon entering the store, users will be asked if they want to use a special version tailored to navigating around the store, rumored to come in September.

Finding an easy solution
Though the reports prove that shoppers are still not purchasing much on their phones, efforts to engage this audience have not subsided. In addition to Google, Facebook, Twitter, Instagram and Pinterest are all experimenting with their own version of a “buy button.” The hope is that these easier and faster ways to purchase without having to move from app to app will improve mobile purchasing.